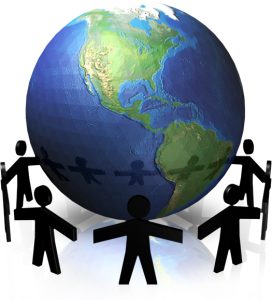 As part of a debate over at VASG the other day, the thorny subject of offshore VAs came up.  This invariably separates into two camps: the one which says it’s disgusting that anyone would work for as little as $4/hour and the ones who see the opportunity.

I am in two minds about this based on a fact finding mission I undertook.  I thought it might be interesting to share it with you.

As a UK based virtual assistant, I was understandably worried when companies like Get Friday started to get more press exposure – I mean, why on earth would you pay £25/hour when you could get the same standard of work from as little as $4/hour?  The general reticence about offshoring work has diminished because it’s not like it’s slave labour – these are university graduates with incredible qualifications and they see working for a virtual outsourcer as a good job.  They earn more than their parents, they live in swanky apartments.  This is not exploitation, it’s the result of our global economy.

I decided rather than burying my head in the sand and hoping none of my clients defected, I would actually find out what all the fuss was about and trial a few of the services on offer.  I wanted to see just how much risk there was to my business, and so I started outsourcing some simple in-house tasks to see what happened.

I picked a few of different kinds of outsourcing:

Now the typing was just a complete disaster on all counts.  I’ve never seen such horrific transcription – and for those of you who don’t know, I don’t speak with any kind of accent, I am the last bastion of the Queen’s English in Scotland!  I am absolutely convinced that I have no fears at all of being replaced by an offshore company for audio typing.

The graphic design had mixed results.  Crowdsourcing was very disappointing – the skillset to create a logo just wasn’t there and our request went unanswered.  The others were okay, ranging in price for $15-$60 for a basic logo.  Nothing spectacular and I wouldn’t say there was much design thought put into it.  Top tip: When requesting a logo from India, specify the colours – apparently their default will be blue and orange since these are prosperous colours in their culture.

I’m not a geek, however I know a man who is.  For security reasons, I didn’t give them the access details to our website, but I gave them the raw HTML code and a list of changes needed.  This was pretty basic stuff – tweak some text, add a box, change an email address with the explicit instructions that it should be coded in HTML without using tables.  Again Crowdsourcing failed to find anyone who could do this task and all three of the others were late delivering the results.  My own Web Geek said that it should have taken someone competent at most an hour to do these changes.  When the results finally came back two had used tables, and the one which hadn’t had failed to make some of the changes.  Now if I had no knowledge of HTML and no Web Geek, I wouldn’t have noticed the difference, but my SEO would have noticed and taken a nosedive.  Web Geek also warned me not to give them access to the web server since he’d had issues with security and could trace it back to a client using an offshore VA who would go in and break the forms on the site any time they weren’t getting enough work!

This is where the offshore assistants shone.  We asked them to find contact details for a list of 20 people including mailing addresses, emails, telephone numbers and websites.  Crowdsourcing came back within 2 hours with the whole list for the bargain price of $2.  The others were similarly efficient, ranging from between $15-$20 for the task.  What I did notice was that the lower hourly cost assistants took longer to complete the task than the more expensive ones, which meant that the price per task was more or less the same.

Because this was such a success we also asked for research on venues in London for a meeting.  It was a bit of an experiment as I usually use the same venue every time when I am in London for meetings.  They came up with some pretty bog standard Google results, albeit presented in a nice Excel document.  Their limitation was that they didn’t know the local area well enough to know where things were or where they should look other than in Google.  I ended up using the same venue as normal.

One thing to be aware of when handling data is your responsibilities under the Data Protection Act and client confidentiality.  Potentially this is a minefield when you offshore work, so avoid providing data to offshore assistants – incoming work only!

Well why not?  My tasks were book a table at a restaurant, phone BT to sort out a problem with our broadband at home, phone my plumber and research a holiday.

Restaurant booking all worked, and we had a giggle about one of our dining companions complaining about offshoring during dinner and explained who had booked the table.  BT was excellent since they’d offshored their technical department to Mumbai and I can never understand what they are saying but my Indian assistant got it sorted out brilliantly.  Plumber was less effective, because he does have a broad Scottish accent and I ended up having to phone him myself as no one could understand him or make themselves understood.  Holiday research was okay but not the cheapest deals – again this comes with knowing local geography to a degree.

Overall there is a place for offshore assistants in the virtual economy.  Simple but time consuming tasks which are not time critical should be the focus of what you outsource and will save you money.  However, briefing and managing the VAs takes some time and practice so that you get good results, and for clients who are already time-starved, the last thing they want to do is explain their task in primary school level English or have results delivered late.  So ironically, that’s where a UK assistant can make money – managing these VAs for their clients.

Having said that there are certainly some tasks which are never going to be able to be offshored.  Speaking to my plumber being one of them!  There will always be clients willing to pay for the convenience of using a UK based assistant who understands the culture, geography and business etiquette of working in the UK.  And there will be some who care nothing for deadlines or quality and just want the work done as cheap as possible.  But that’s the same in every industry – for every 2nd hand car dealer, there is a Mercedes garage.

The best advice is to find clients who value your skills and experience and to do a great job for them.  That’s value in any currency!