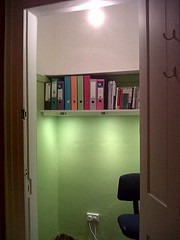 Back in 2011, I made a fairly radical departure from my working life… Up until that point, I’d been a fairly unusual virtual assistant because I worked from an office which was just round the corner from my little flat.

When we moved to a much bigger house which needed rather a lot of work doing to it, having me on site to project manage was not only possible but also sensible too.  So I built my own little organisational corner here.

Three years on, what’s worked and what did I change from my original plan?

Size: Well, one thing which worked exceedingly well is the size of my office.  It’s tiny, which quite a few people commented on because we do have a fairly rambling house… They couldn’t understand why my husband Craig got a whole room to play with and I got shoved in a cupboard.  But the key to this is that I’m by nature extremely messy – having a small space made me keep it tidy.  (Michelle Crowther used to joke that the reason that I had two desks in my old office was so I could move to another one when it got too bad!!  She isn’t actually far from the truth!).  It also meant that through the bitter Scottish winters with no central heating and occasionally no windows, it was easy to keep warm – a big plus point for any typist.   The other bonus for my office is that it’s just off the living room near the front door and the kitchen, so I can answer the door, make a cup of tea or keep an eye on our son whilst checking emails.

The door: This one is very important.  I love being able to shut myself in there to work and also to close the door on it at night.  Every office should have a door.

The storage:  Despite being tiny, the office actually has loads of storage up above head height in the form of shelves.  My husband has a whole room upstairs as his office and I truly believe that despite him having 10 times the amount of space, I actually have more useable storage than him.  The key is in the planning.

The colour: More and more I’m seeing this lime green colour everywhere.  I seem to have a knack for spotting trends a couple of years before they happen – my old kitchen was red perspex, then I painted my new one a duck egg blue, and now my office colour is springing up in all the interiors magazines!  I do think it could do with a touch up – especially where my chair has rubbed the wall a bit – oops!

What did I change?

“desk”: I did tweak the height of the shelving in the office to suit my own height so the monitor was at eye level.  I added an extra shelf underneath for a keyboard, with a cut out so I didn’t feel like I was constantly doing Pitman typing tests with the cover in place! (Anyone remember them?).  This also let me sneak in an extra shelf for the printer so it wasn’t on the floor and also some storage for labels/reams of paper.

Lighting: The under counter IKEA lights are very much nearing the end of their useful life… As brilliant as they were, I believe there are now better longer life halogen ones out there which don’t get as hot and use less energy.    Despite the ribbing from Tam the Handy Man, my office wasn’t Blackpool Illuminations, and I think the money spent on getting the light in there was well spent both from a practical point of view and a mental one – it’s a nice space to be in.

Noticeboards: I did put up a few whiteboards and cork boards – I think very visually and these help me track where I’m up to.  I’ve got some cute pictures and postcards on here too!

The radio: I’ve added this as I realised I enjoy the noise and it keeps me motivated.

Share your pics of your home office – did anything work well?  Perhaps you are in a corner of the living room and prefer the background noise? Or perhaps you have a top tip on what desk to buy?