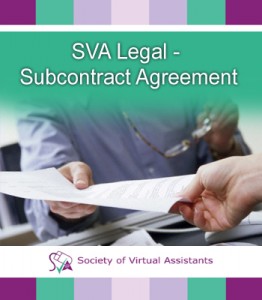 I had a really sad phone call last week – a VA called me up to ask if I could help her, and unfortunately there wasn’t a lot I could do, as the horse had bolted.  However, she did agree to let me tell her story (anonymously of course) to act as a warning for other VAs.Let us call the VA: Suzie.  Suzie had too much work to cope with on her own, so she outsourced to a VA she knew from a virtual assistant forum, sending through the brief, client’s contact details and how much she was willing to pay and roughly how long the task should take.  Sounds good right?  There’s no misunderstandings about what needs done, no inflated bills when the task is finished etc.  The task gets done and the client is happy.

Next month Suzie contacts the client to see what is needing done.  Client says he doesn’t need anything and that he’ll probably not be using the service again, since he doesn’t have much work on.  Suzie is disappointed but occasionally these things happen.

However, six weeks later Suzie sees a post on the forum from the VA she outsourced to, promoting one of the client’s events.  Yup – the client had googled the subcontract VA’s name, seen that she was £5/hour cheaper than Suzie and started using her instead.

Even amongst SVA members, this issue divides us: https://www.societyofvirtualassistants.co.uk/svaforum/viewtopic.php?t=2346&highlight=ethics

But the important thing is, Suzie didn’t have a case because she hadn’t secured a contract with the subcontract VA.

Make sure you have a watertight contract in place with your VA at the very start of your relationship.  Not only does this spell out what is/isn’t acceptable, it gives you a legal recourse to take should the VA negate the contract.

SVA’s Subcontract agreement is a “fill-in-the-blanks” style contract including: